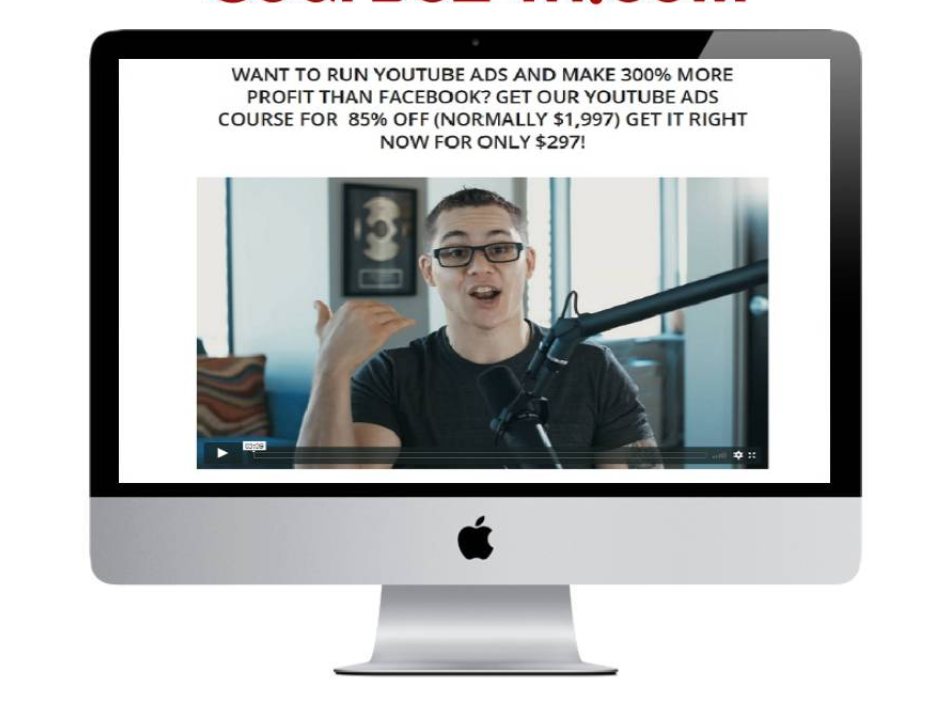 Here’s a screenshot of my average monthly evergreen revenue before I started using YouTube ads:

And here’s one from after I started using them:

Pretty cool right? But I should tell you that based on my experience, YouTube ads aren’t a great fit for every niche. I’ve tried them in two separate verticals and results were mixed. But for my online course The 80/20 Drummer, YouTube ads 1.5xed my revenue.

In this post, I’m going to tell you exactly what I did, how I determined if it was working, and how you can see in as few steps as possible whether it might be a winner for your online course sales. If you’re looking for tips to create awesome videos, we made the ultimate YouTube guide.

Key factors for advertising on YouTube successfully
Given that I watched one YouTube campaign succeed and another fail, I’ve narrowed down a few key factors that likely made the difference: speaking to a specific customer avatar, offering proof of every claim, and targeting an audience that was already on YouTube. Once I was getting strong view-counts, I tested multiple videos and formats, then doubled down on the best performer.

Know thy audience
Here’s a screenshot of the view rate from my latest campaign:

That means that 23.49% of people for whom my video popped up before they video they intended to watch (impressions) ended up watching at least 75% of it. (My primary CTA, “click here to get your guide”, is at about 75% of the way through the video.) Why did so many people in my audience watch the video to the CTA?

I believe it’s attributable in large part to the specific language I used. By the time I launched the ad campaign I’d already had the business for more than a year. I’d surveyed people who bought my course to see what their biggest challenges were. Here’s a screenshot of the survey table:

Then, when it came time to script the videos, I tried to stay as close-as-possible to my audience’ own words. Here’s a version of the final video script for my first round of ads:

In contrast to a more general approach, this let my audience know I felt their pain, and that my offer was for them specifically.

Prove abundantly
When I first experimented with paid traffic in the marketing space, I noticed far-worse results than in music niche. While I’m sure greater competition and more-strained attention accounts for some of the difference, I suspect strongly that proof is the key.

In the drum ads, I started by speaking specifically to my audience’ unique obstacles. Great: that let them know I understood them.

But how did they know if my course worked or not?

Simple: they could watch me play the drums.

That’s why video is a great – and, in my opinion, underutilized – medium for any niche in which you can demonstrate competence visually. That makes it a no-brainer for:

If you’re considering video ads, a good question to ask yourself is “how do I use video to prove my system works? What’s my equivalent of a well-executed dance move?” It could be anything from demonstrating a math problem to a 2-minute client interview with a “success story”. The key factor is that you’re taking some measure to prove your method works.

One reason YouTube worked so well for drums is drummers go to YouTube to watch drum videos.

So before starting a campaign, ask yourself: “does my audience hang out on YouTube?” A good way to corroborate your suspicions is to search your niche on YouTube, and look at the subscriber and view counts of the most popular channels.

Do the most popular channels have more than half-a-million subscribers? More than 100,000? Then you’re probably safe. If not, more testing is required. The niches I mentioned above (from martial arts to public speaking) all have strong fan bases on YouTube. Others, like (as I discovered) marketing, do not.

If you suspect your fans congregate on YouTube, you don’t have to launch a kitchen-sink ad campaign to test your hypothesis. Just make a one-minute video that demonstrates something valuable to your audience, and pay $5/day to promote it. (E.g. if you’re in the cooking niche, you might determine that many people have trouble slicing pineapples, so your video could be “the 30 second hack to slice a pineapple, even if you don’t have a sharp knife”, or “Can this BUTTER KNIFE slice this pineapple?”) Link from the video to your landing page in case people want to “learn more”. If engagement is strong, you have a good basis to proceed.

Test, then double down
When I launched my flagship YouTube campaign last spring, I started with 3 video ads, with 3 variations on the script (all of which were still in my audience’ own words).

First, I ran the videos simultaneously for a week, and checked which had the most opt ins. (I track opt-ins instead of views whenever possible, because you’re looking for people who will take the next action, and sometimes the best-performer for opt-ins won’t have the strongest view rate.)

My Infusionsoft campaign manager displays the opt-ins from 3 sources
Next, I tested the winner in two formats:

In-stream was the clear winner, though this won’t be the case for every niche or business. Sometimes people willing to click on an in-display result may opt-in at better rates than those who were simply interrupted.

I had good evidence from a previous video campaign that the ads would prove ROI positive. But I still needed a way to track the results.

How I made sure my ads were profitable
As I’ve written elsewhere, knowing whether a paid traffic source is profitable can be more art-than-science. As an example, I cancelled a campaign I thought was ROI negative this past year, only to see a dip in sales that only came back after I reinstated the campaign. The problem? I was under-counting the sales from that campaign.

The squishy thing about attribution is that not everyone who buys clicks directly from your ad to your page. Some people will see an ad, check out some of your other videos, then come back another day and google you of their-own-accord. That’s why I like to use a combination of methods to track ad performance.

Direct attribution
Customers who click directly from your ad to your landing page are relatively easy to track. Google lets you set up conversion tracking directly within your campaign dashboard. As long as you have an analytics account, you can embed a pixel on your “thank you” page after purchase, and Google will count your conversions.

Because I’m superstitious, I like to be redundant, but I’m also decidedly low-tech about it. Each ad links to a dedicated landing page with its own opt-in:

Most email services will let you embed different opt-ins on every page of your website, and “tag” subscribers with the lead source. I use Infsionsoft, but even MailChimp allows this.

Related: How To Build An Email List (Complete Guide)

Next, I count the sales made at the end of the month, and see how many of the “buyers” were tagged with the ad as a lead source. If I made more than I spent, it’s profitable. (You can do this manually in a spreadsheet, though Infusionsoft makes it easy to automate.)

But as we already covered the above method doesn’t count buyers who saw your ad and didn’t go directly to your landing page. And given that a good ROI for paid traffic is 150% (meaning you made $1.50 for every dollar you spent on advertising), those extra sales you’re not counting might be putting you in the black without your even knowing.

Indirect attribution
To count the buyers for whom the ad was their first exposure to me, but who didn’t click directly to the landing page, I use surveys.

I ask “where did you find me?” at two points in my funnel: first, immediately after subscribers opt-in (in exchange for a bonus video), then after they purchase.

Not everyone who opts-in will answer the survey. So you’ll still be under-counting to a degree. But the good news is if you’re profitable using these metrics, there’s no doubt your ads are working at least as well as the numbers indicate.

Could YouTube ads be a cash machine for your online course?
If you end up with a profitable ad campaign, you’ve got the holy grail: a change machine that accepts dimes, and spits out quarters. Free traffic sources (See our Youtube Marketing Guide) are reliable over the long-term, but nothing allows you to “press the gas pedal” quite like paid traffic, and the usual sources (Google Adwords and Facebook Ads) are highly saturated in my opinion. If YouTube ads are a viable traffic source for your online course, you might be sitting on a cash machine.